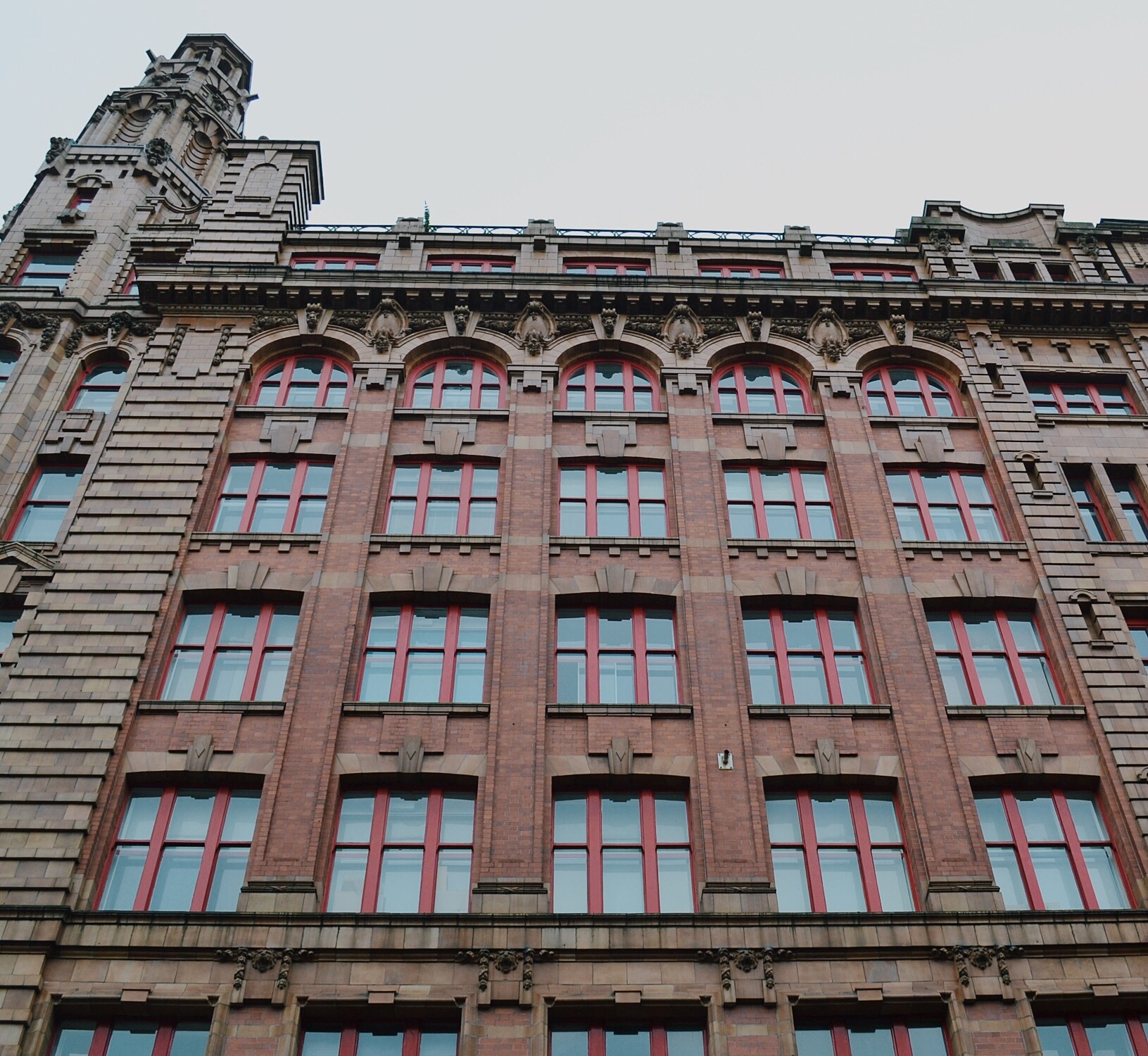 Last minute work alterations meant that Laci was able to join me in my day trip to Manchester! I had plans to visit my cousin Mate and his girlfriend Szandi who now lives in Macclesfield just outside of this northern city. Our journey was an early one; we left our place at 6.30 am to head to Euston station. As we arrived almost an hour prior to departure, I was treated to a chai tea latte and a sweet red velvet cake. Little too early for such sweet delights, but I guess we had to celebrate the beginning of our trip somehow.

Virgin Trains arrived at Manchester Piccadilly promptly at 10.28 am, where I was greeted by my cousin Mate and his girlfriend Szandi. Since Laszlo was a surprise guest, he snapped a few photos of our meeting before they noticed the familiar face. We quickly headed for a walk along the southern end of the city, admiring the varied architectural styles, ranging from Victorian to contemporary architecture. The city is characterized by the widespread use of red brick; much of it converted industrial buildings dating back to the city’s days as a global centre for the cotton trade. Many former cotton mills and industrial buildings have been redeveloped into loft style apartment buildings and modern office spaces. The colourful pipes definitely added character to these red structures.

We soon discovered one of the most important Victorian buildings in England, Manchester Town Hall which can be found in Albert Square. It was built in the Gothic revival style, and is a magnificent sight.

In contrast, the city also now has a number of skyscrapers, the most significant being Beetham Tower. Completed in 2006, it is an example of the new surge in high-rise building and includes a Hilton hotel, a restaurant, and apartments. It is the tallest building outside London and has been described as the United Kingdom’s only true skyscraper outside the capital. It is quiet powerful and scary structure with to top layer extending out.

As fortunate as I was to have spent the day with loved one, unfortunate it was that we were in the grey city on a rainy day. The type of rain you may see in movies where it’s pouring more so than raining. Hence, we ran to The Museum of Science and Industry. It is a large museum devoted to showcase the development of science, technology and industry with emphasis on the city’s achievements in these fields. The displays are focused on the theme of transport such as cars, aircrafts, and even a running steam engine traveling back and forth on the grounds.

Since the famous John Rylands Library was merely 700 meters away, I made an executive decision to guide the group to it in the horrid weather. It is a late-Victorian neo-Gothic building in the core shopping area of the city. The special collections, believed to be among the largest in the United Kingdom, include medieval illuminated manuscripts and examples of early European printing among the magnificent neo-Gothic architectural style.

Our final historic building and one of the last famous sights in the city was the Manchester Cathedral. Built in the Perpendicular Gothic style, it has wooden furnishings and a nave roof supported by angels holding instruments. It was currently being renovated; hence we could not admire its full beauty.

As for food, I have to give Manchester two thumbs up. It was a day of splurging and indulging, but well worth it for all the delicious flavours. We made a quick stop at Patisserie Valerie, where we purchased a beautiful apple turnover. It tasted very Hungarian, and as it was split among the four of us, I don’t think it did us too much harm. I can’t say the same for our next stop…

Home Sweet Home. It was on our list of places to try, but we discovered it accidentally. Located in the bustling Northern Quarter of the city, it appears as one of the many redevelopments of industrial buildings. The restaurant’s inspiration came from a mixture of ‘California style coffee shops and New York late night cake and coffee havens’. A place where guests can truly indulge their inner child, we were also mesmerized by their display of scrumptious cakes. We decided to split two slices between the four of us, but even one would have been enough due to their high sugar content. However, the coffee was just perfect!

For dinner, we picked the party spot right near the shopping centre. TigerTiger is a multi-level venue, whereby they cater to various themes and music styles. Even though it was only 5 pm when we arrived, many were already partying. Our quiet corner in the dining area was just right, situated just under the heater. Garlic bread, calamari and a round of fancy cocktails is how it all started. Followed by steak, burger, a number of sides, a brownie dessert and another round of drinks. Accompanied by great conversation, we all had a great time.

A rainy great day for our first time in Manchester, but a great time spending it with family! 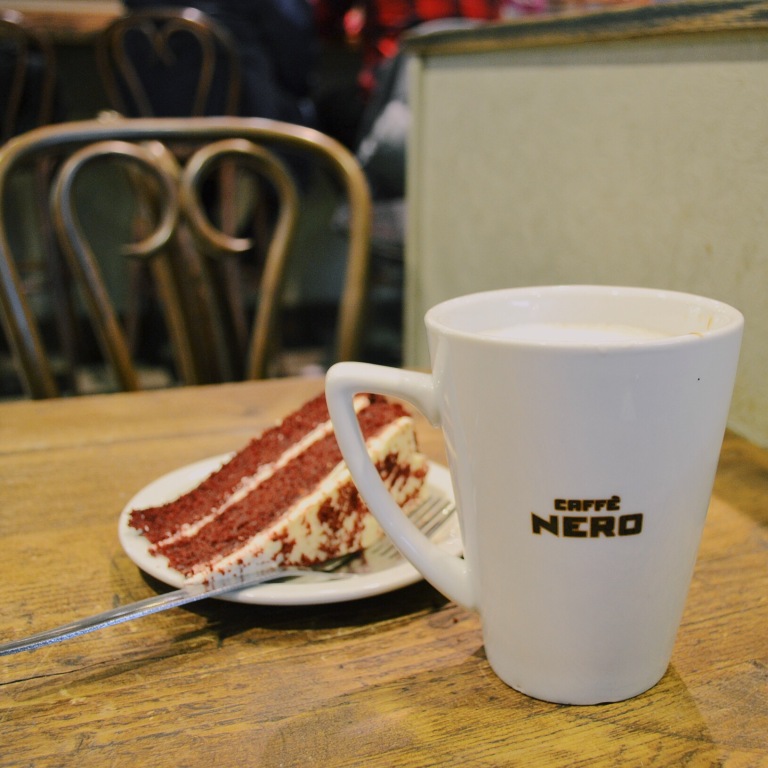 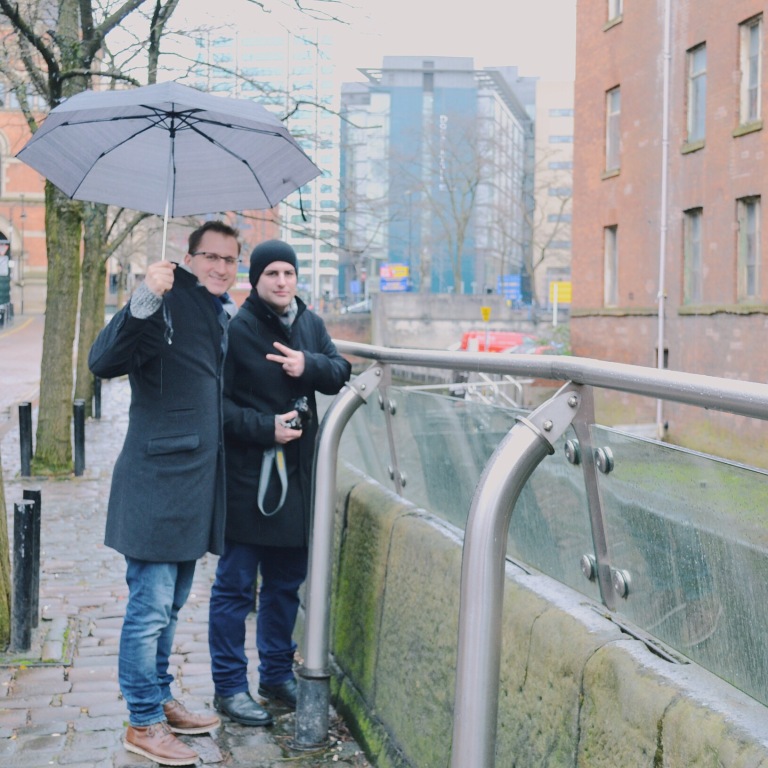 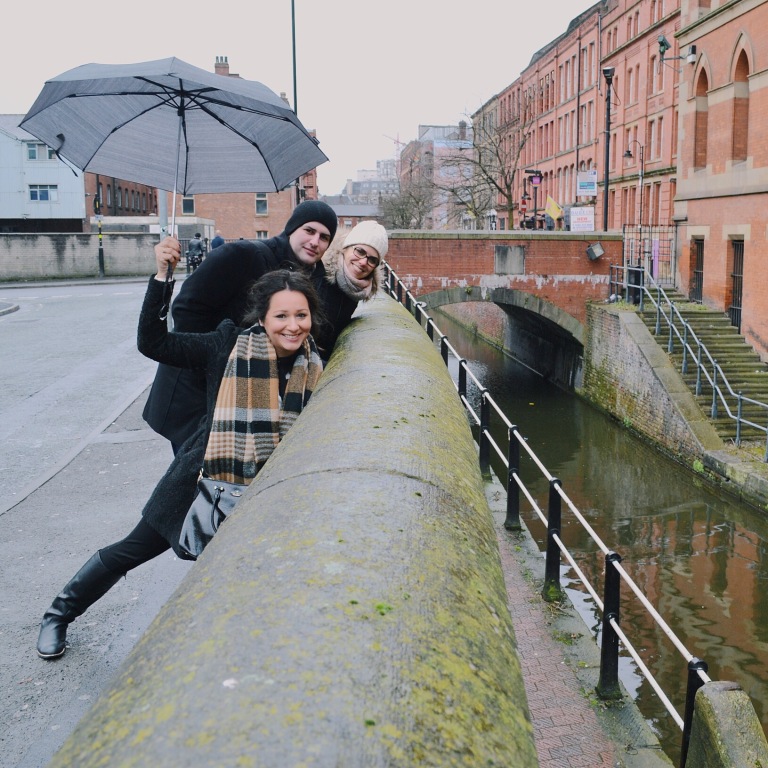 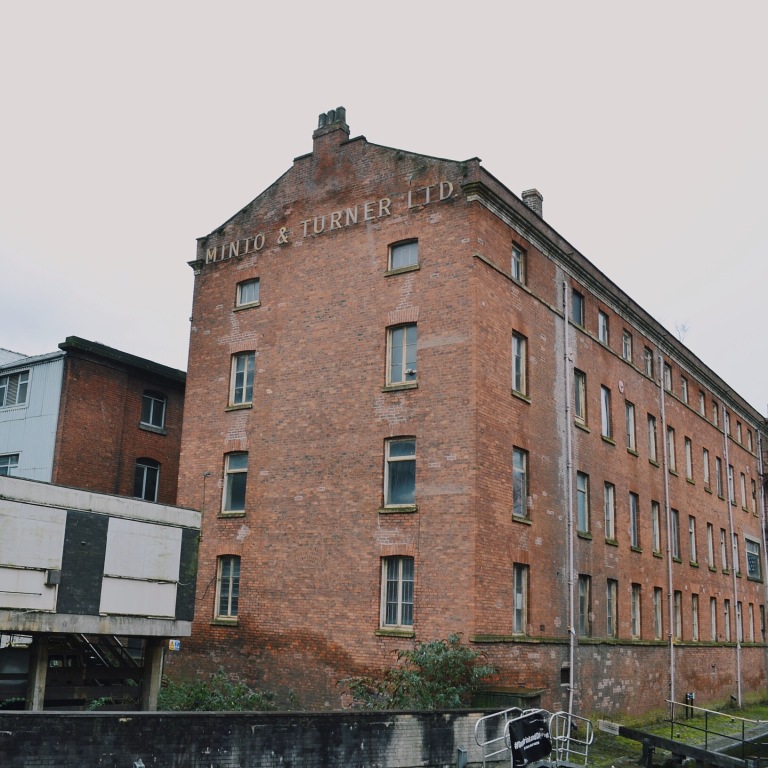 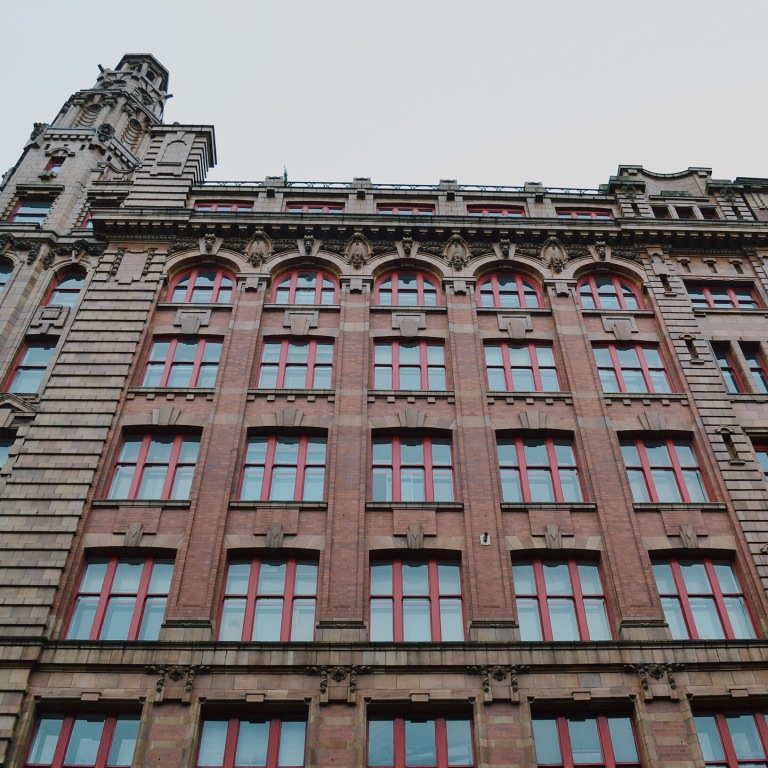 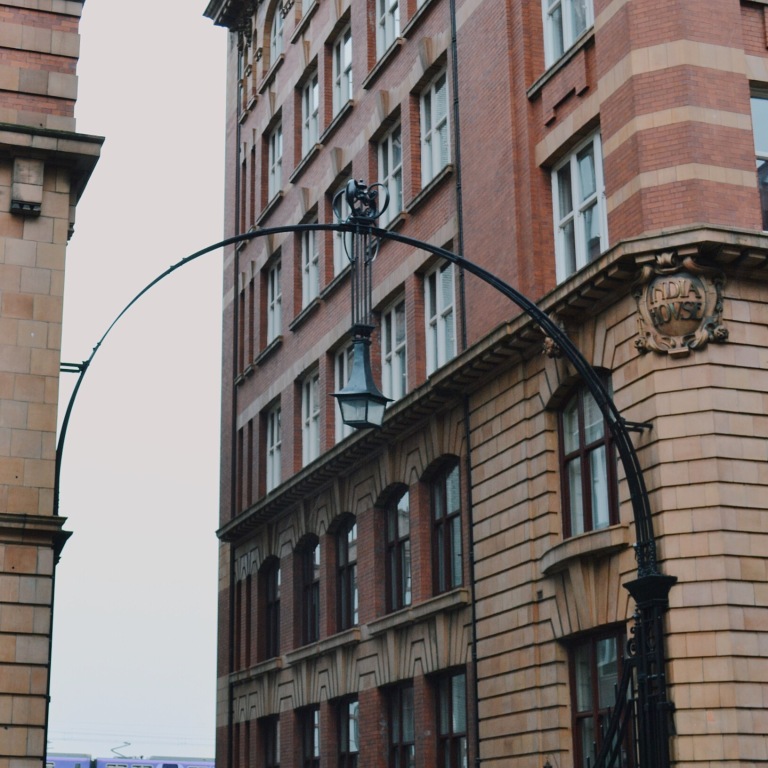 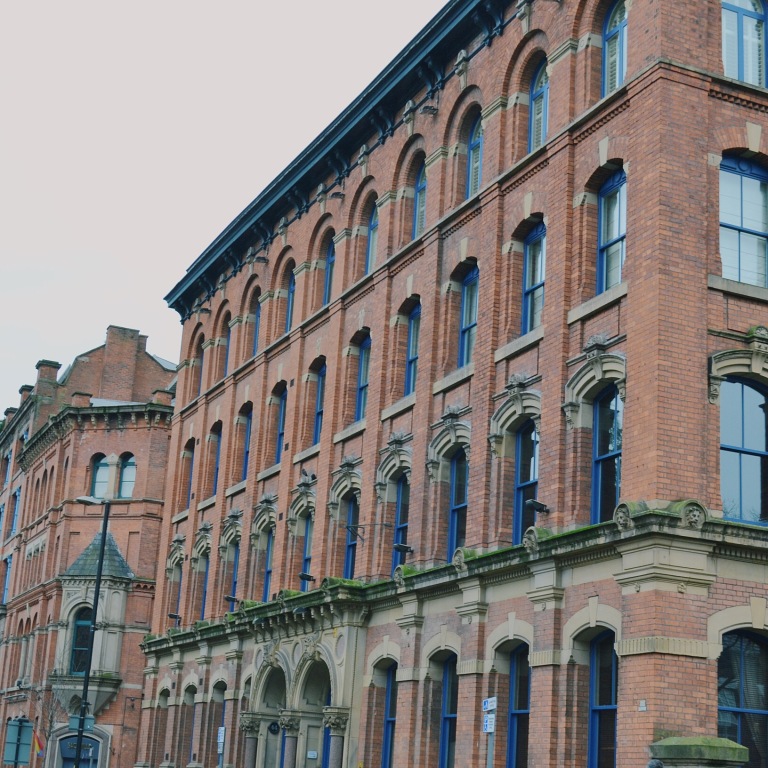 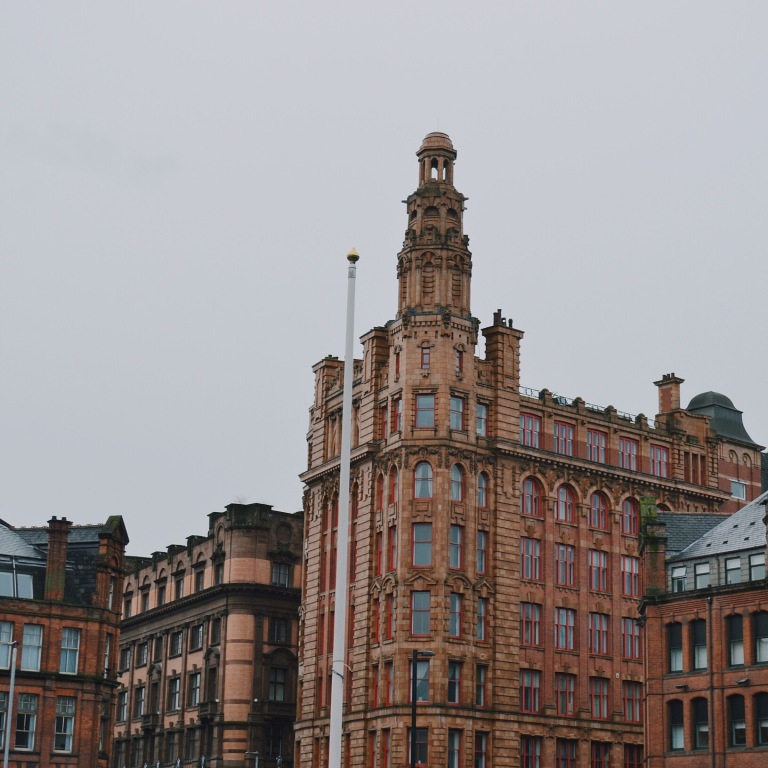 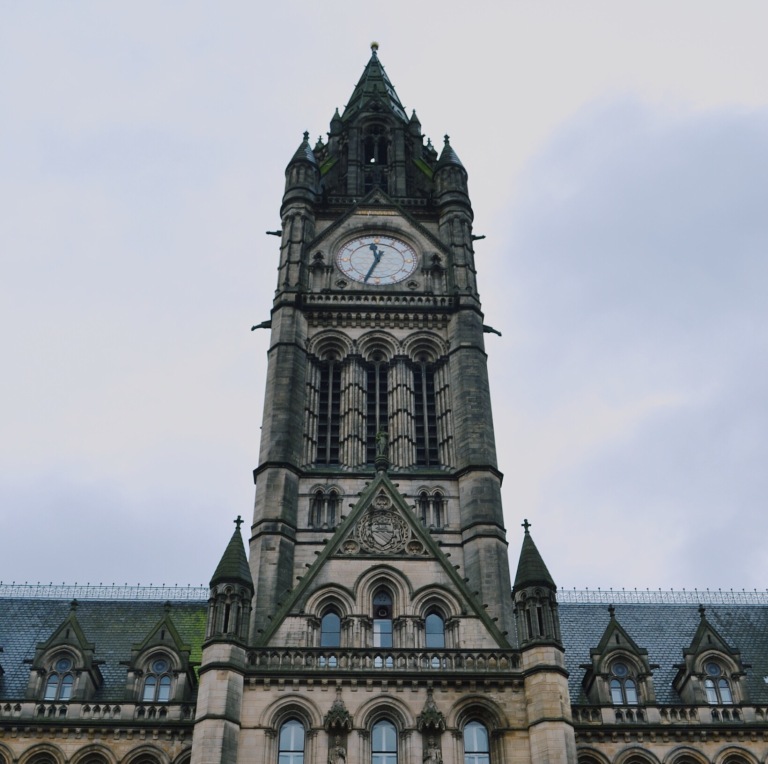 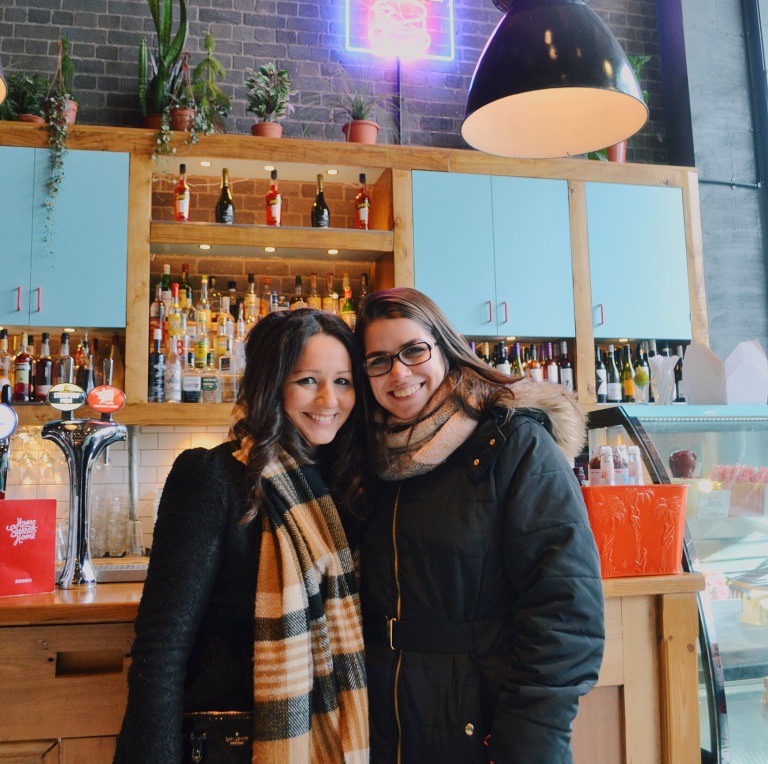 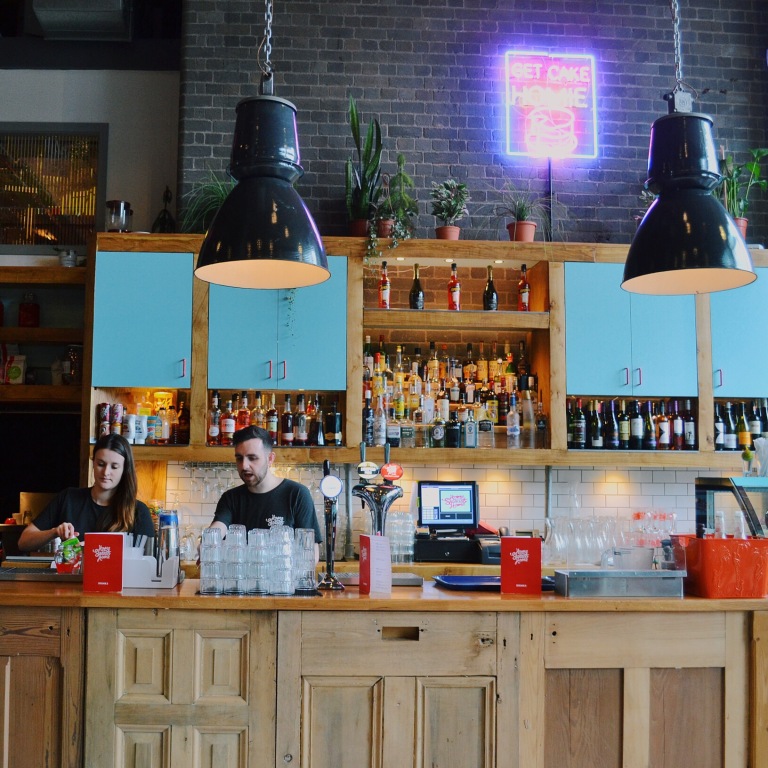 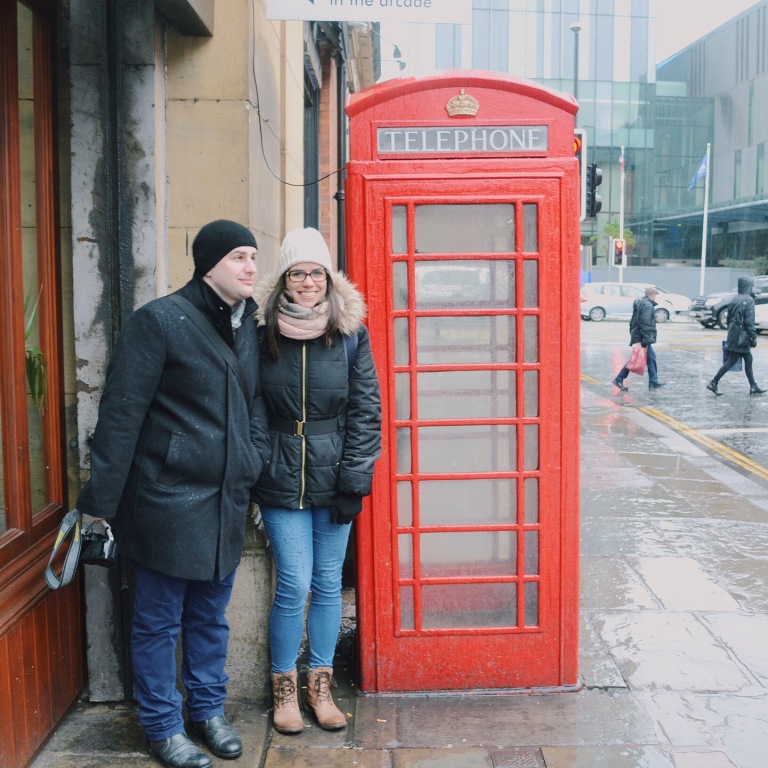 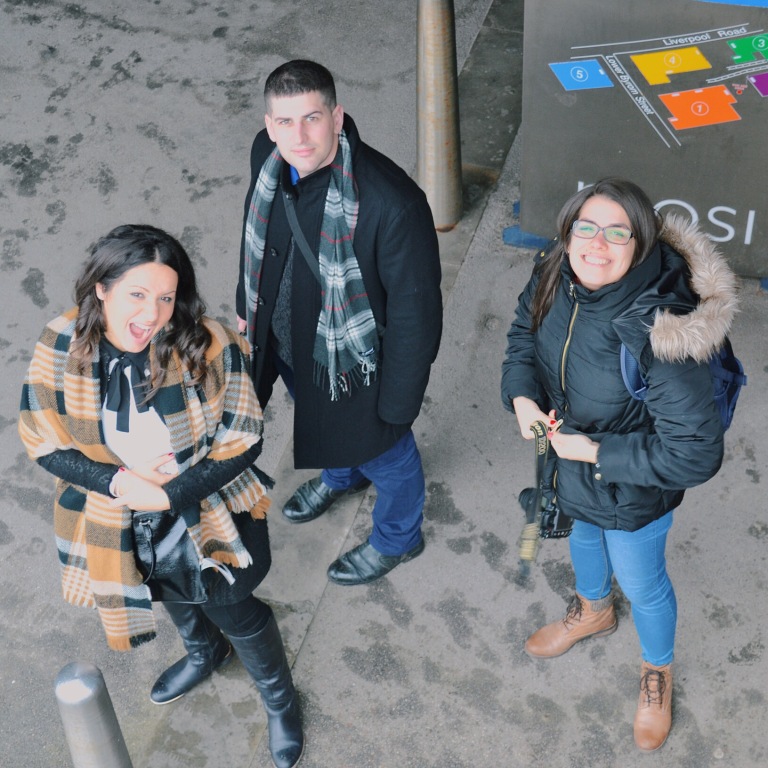 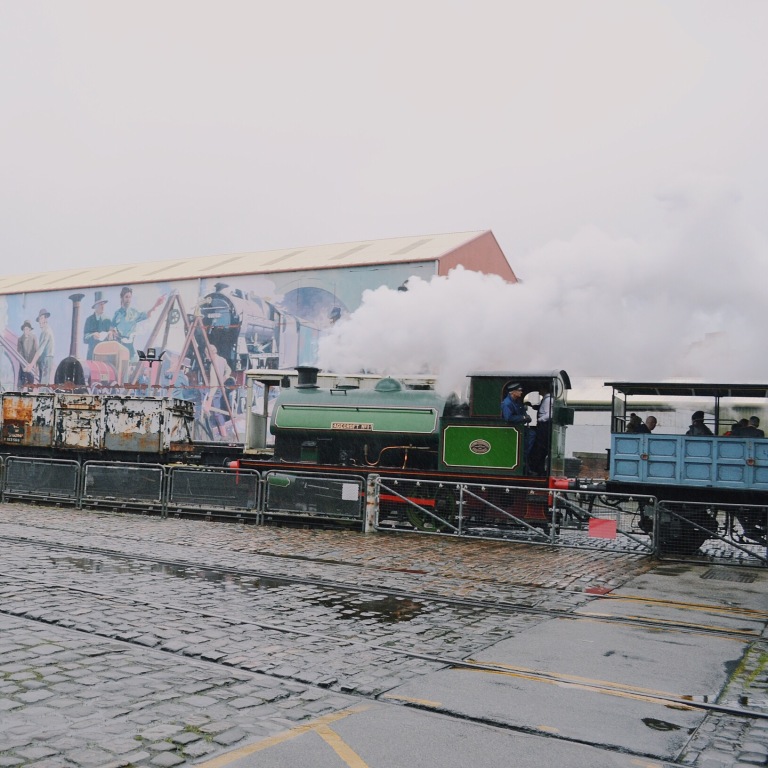 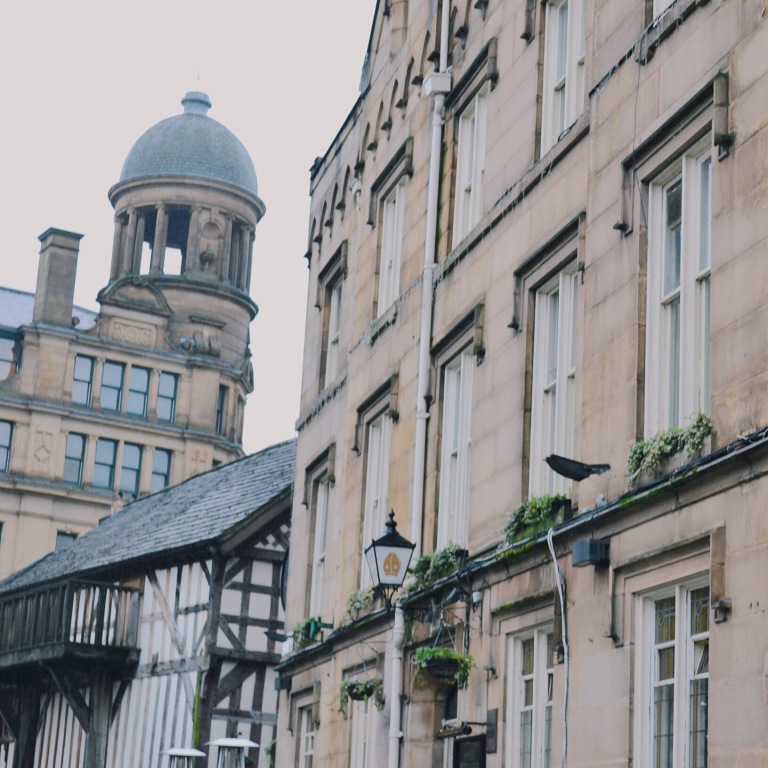 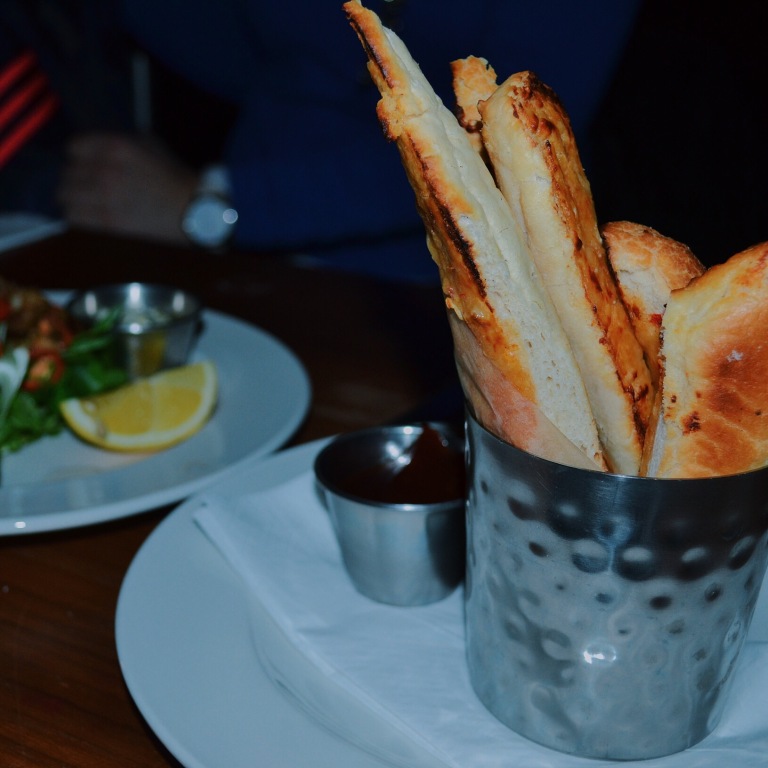 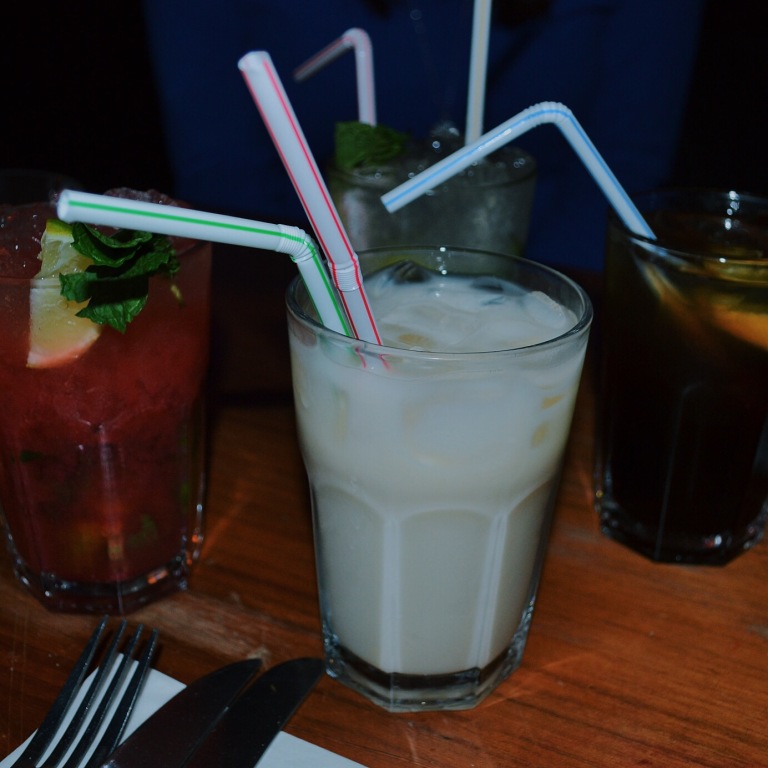 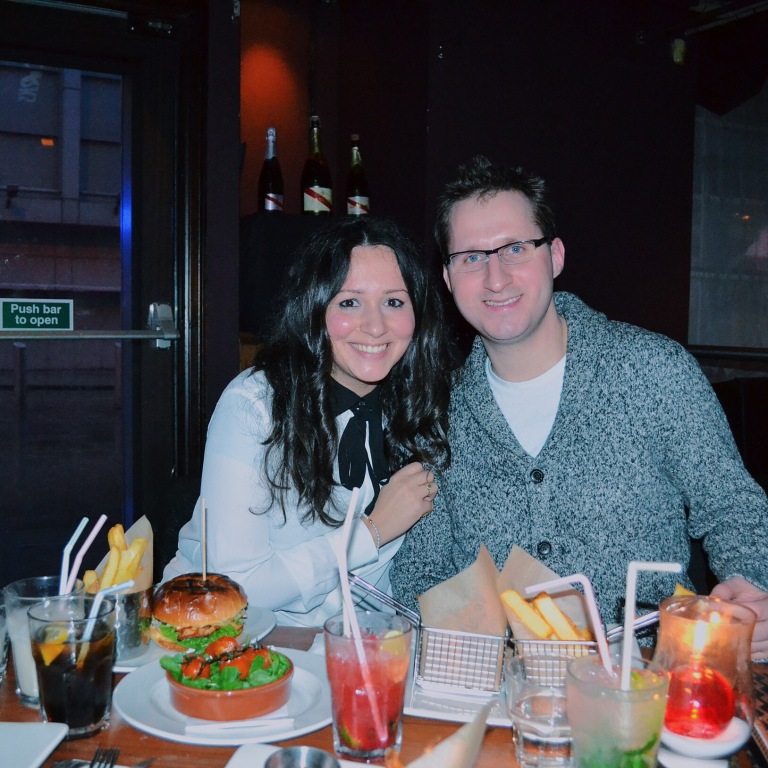 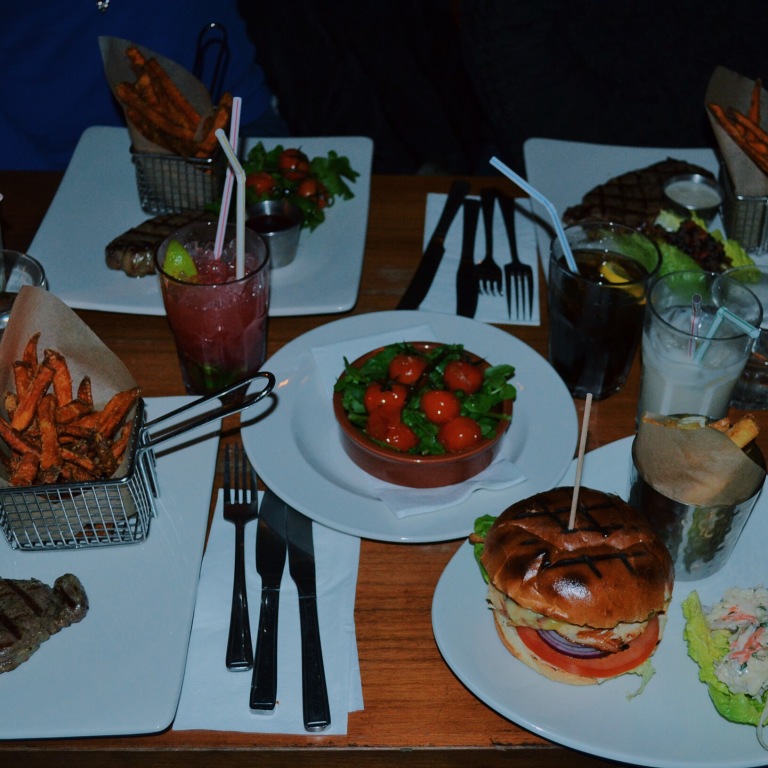 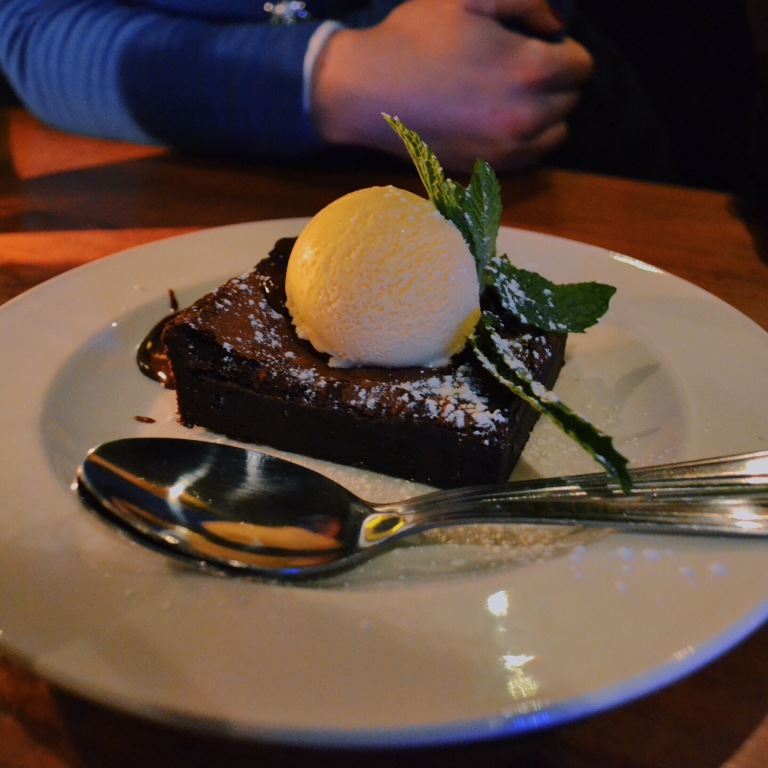